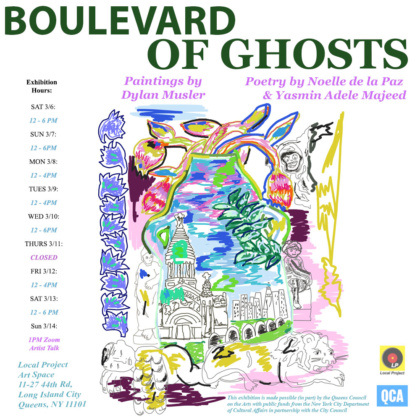 Noelle de la Paz, Yasmin Adele Majeed, and Dylan Musler came together in 2020 to create a dialogue through poetry and painting that explored the saga of the borough of Queens, New York, both in times of hardship and revitalization. Their goal was to examine six spaces in the borough, which Musler chose for the way they’ve transformed throughout history, and the impact that these transformations had on the surrounding communities.  From the images Musler painted, de la Paz and Majeed used the framework of ekphrastic poetry to describe what they saw in her work, and then both expanded their writing into something more personal.  Their hope is that the work is grounding in the way it navigates the past to cope with the present, and shows the importance of a borough that has been less focused on in present-day culture and throughout history.

This event is made possible (in part) by the Queens Council on the Arts with public funds from the New York City Department of Cultural Affairs in partnership with the City Council.”

Noelle de la Paz is a writer, artist, and all-around storyteller. Based in NYC, her creative and professional work revolves around assembling words and images, plants and food. Noelle’s stories are inherited, lived, made up—almost always some combination of the three—and often explore girlness, brownness, languaging, and movements through borders, real and imagined.

Moving to Woodside almost six years ago, she found a multiethnic cityscape with neighborhood vibes kindred to the San Francisco she grew up in. Since then, she’s been daily charmed by Queens’ culinary wonders, by its layered history, by its bustling, fragrant, many-hued brown. And, while she recently moved out of the borough, she is ever-grateful to have practiced the art of home-making within such a sprawling, storied world.

Yasmin Adele Majeed is a writer from California living in New York. She has received fellowships and support from Kundiman, Kweli Journal, and the Fine Arts Work Center. She has lived in New York for over ten years and lived in Sunnyside and Woodside from 2018 to 2020.

Unexpectedly, she did not write these poems in Queens, the borough of her heart, because when the pandemic hit, her roommates left town, and she ended up moving in with her partner in Brooklyn. This project was an exercise in nostalgia and love for the borough, which, for as long as she has lived in New York, has been a haven for her, and also mourning for the many residents, most of whom were working immigrants, who died of Covid-19 this year. She wrote most of these poems in the fall, after a harrowing spring and a revolutionary summer, when the fight for a police-free and eviction-free New York was brought to the forefront of our city. It was a summer with protests every night, and it feels impossible to talk about Queens or New York without mentioning that moment of radical possibility.

Dylan Musler is a painter, born and raised in New York City, and has been based in Sunnyside, Queens since 2018.  In 2019, she started an affordable studio space with her partner in Long Island City and shares it with six other artists. Recently she learned that the building’s landlord would be ripping down the entire block in 2021, to create glass condominiums, not unlike the circumstances that surround RKO Keith’s Theater in Queens. She is passionate about affordable space as a platform for artistic communities in New York, and wants to find a way to make them sustainable.

Her personal work stems from an interest in narrative perspective, and the struggle for ownership in the stories we tell about ourselves and each other. Musler enjoys navigating that tension, and exploring gestures in characters and space in order to illustrate those unspoken and layered narratives. The paintings begin with a drawing, and then organically move away from it, with images slowly interspersed that are derived from the artist’s personal experiences, poetry, novels, and art history.