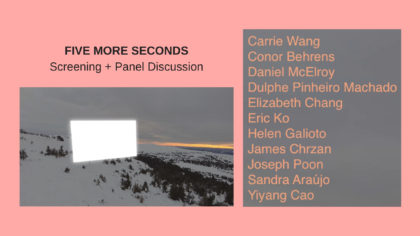 Please join us for Five More Seconds, an evening of screenings. 11 submissions from emerging artists were chosen through an open call. The title of the screening “Five More Seconds draws from the practice of Wim Wenders, a German filmmaker. Artists were encouraged to explore the possibilities of the metaphorical “five seconds” in video production. The screenings were curated by Seung Hee Kim.

Carrie Sijia Wang (b. 1989, Chongqing, China) is an NYC-based multimedia artist, designer, and creative technologist. She received her BFA from the School of the Art Institute of Chicago and is currently enrolled in the Interactive Telecommunications Graduate Program (ITP) at New York University. Her work has been shown at venues including Pier 92 (New York), Art Museum of Guangzhou Academy of Fine Arts, New York Transit Museum, Spokane Public Library, CultureHub and De-Construkt Project Space.

Daniel McElroy (b. 1996, Manhassat, USA) is a multi-media artist who received his BFA in Studio Art from Adelphi University with a double minor in Art History and Graphic Design. His set of sculptures, “Nativism” was installed at Adelphi to naturally decay into Adelphi’s plant gardens, making McElroy the first student to have his work installed on campus grounds. He also organized an exhibition at Adelphi about the relationship that local communities in Cuba have to the economy.

Dulphe Pinheiro-Machado (b. 1981, Porto Alegre, Brazil) is an artist based in Queens, NY. He holds an MFA from Pratt Institute and a Masters in Political Science from UFRGS, Brazil. His work investigates the way memory can be built upon emotional images through various media. In recent years, he has shown his works at IAC Headquarters in New York and the Museum of Image and Sound of São Paulo, Brazil. He was a fellow of the 2015 Samsung Virtual Reality Lab and a fellow of the 2017 NYFA Immigrant Artist Mentoring Program for Visual Artists.

Elizabeth Chang (b. 1980, California, USA) was trained in the medical sciences at University of California, Berkeley and Columbia University. She works primarily in sculpture and installation. Themes in her work include the nature of perception and memory, illness, loss, migration, displacement, repetition of history, and ways in which the past affects the present, both on a societal and individual scope. She attends CUNY Hunter College and resides in Brooklyn, NY.

Eric Ko (b. 1991, New York, USA) is an independent animator, filmmaker, and artist. He is engaged with emotional distillation through textural and visceral atmosphere. He is interested in visual poetry by way of both abstraction and objective imagery. His works have been screened this year at numerous international experimental film festivals, including Laterale Festival in Cosenza, Italy, Unseen Festival in Denver, Colorado, Punto y Raya Festival in Wrocław, Poland, and Haverhill Film Festival in Haverhill, Massachusetts. He holds a BFA in Film/Animation/Video from RISD and has worked as a guest critic for multiple film and animation programs since 2016. He currently lives and works in Brooklyn.

Helen Galioto (b. 1997, New York, USA) is an artist based in Bronx, NY. Her name comes from the Greek word ελενη, which refers to a guiding light on the water.

James Chrzan (b. 1992, Illinois, USA) is an artist and musician working in New York City. He works in a variety of mediums including matchbook, phone number, and tarot card. He plays drums in the band Julep Maisey and is an MFA candidate at Hunter College.

Joe Poon (b. 1974, Hong Kong [when it was a British colony], American citizen present day) is an art educator and a conceptual artist, working primarily with installation and performative pieces. He received his MFA in Integrated Practices from Pratt Institute. Poon uses video and video production to communicate ideas found within media, especially television media.

s4ra (b. 1976, Porto, Portugal) is a digital media artist, who engages her animations with the experimental and explorative process of the video games and popular GIFs.

Yiyang Cao (b. 1991, Hangzhou, China) is an artist based in Brooklyn, NY. She received her BFA in Film/Animation/Video from Rhode Island School of Design. Through videos, participatory sculptural environments, and live performances, Yiyang’s work investigates the rhetorics of time in new media; exploring the cross- pollination between out-of-screen and in-screen time, she attempts to provoke dimensional thought on perception and our collective states of being.