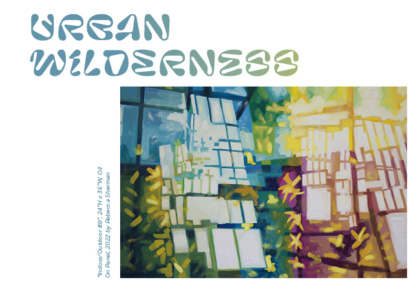 The exhibition features a dialogue between two series of paintings. The first series, Industrial Evolution (2015–2019), depicts old factories and industrial spaces in New York that have been transformed into something else (start-ups, art spaces, location sites, etc). The compositions smash color, planes, and light together to compress time into one flat surface.

The second series, Indoor/Outdoor (2020–2022), was initially inspired by the boundaries that we’ve lived in during the COVID 19 pandemic. It explores the relationship of being indoors versus outdoors and the contrast between the city and the countryside. The paintings feature industrial spaces and windows that merge into natural landscapes to create a new perspective. Each composition dissects “Mondrian” patterns of windows from industrial buildings in Long Island City. Sherman layers these window patterns with images of various landscapes (such as a state park, an ocean waterfront, a tropical rain forest, and a desert). The paintings show how the windows evolve into the rock formations, water, sky, leaves, and trees. Eventually, the series extended to imagine a post-apocalyptic city where nature ‘reclaims’ abandoned buildings.

Urban Wilderness is made possible (in part) by the Queens Council on the Arts with public funds from the New York City Department of Cultural Affairs in partnership with the City Council.

Rebecca Sherman’s paintings feature architectural structures and transcendental spaces in an urban landscape suffused with color and illumination. Her artwork is designed to capture the moment and become a dual representation of our internal states and external experiences. Our perception and memory change as the space around us changes. Feminist theory has influenced her artwork to visually communicate that there are many diverse, intersectional perspectives.

Most of her artwork is inspired by New York City’s constant evolution, collective memory and ultimate essence. Her reconstruction of the city paints a visual soundtrack for the intangible experience of its dynamic space.