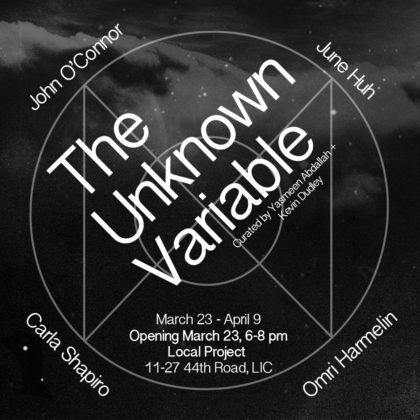 So states the Law of Conservation of Energy, “energy cannot be created nor destroyed”. In a world where we exist in controlled environments, this is the one phenomenon which we will never be able to command.
The show takes Einstein’s statement not as deductive fact, but a modern, secular attempt to outwrestle the biggest uncertainty that faces all of mankind: what becomes of us in the afterlife?
Einstein’s revelatory statement is the core inspiration for this exhibition, The Unknown Variable. The show would feature works by Carla Shapiro, John O’Connor, Jo Eun Huh and Omri Harmelin, a diverse group of artists working across two- and three-dimensional mediums to explore this concept.
Carla Shapiro’s Charlotte photographs capture the landscape of an aging body, one that the artist has to admit is near its end. Through photography, the life cycle of memory, remembrance, and forgetting, or letting go, is halted. Like embalming, the subject is prevented from decay. This meaning is compounded by the photographic subject’s Alzheimer’s disease; an experience that takes the ‘soul’ – what we know of a person – out of what inhabits it, creating a sense of afterlife.
John O’Connor’s Self-Portrait with Sun Spots photo series maps the astronomical phenomena onto the artist’s face. This maneuver appears to acknowledge both the dense science governing the star which supports and connects life on earth, and the skin condition that alarmingly brushes against melanoma – that which threatens life. Both anxieties are fed by that which is supposed to placate them: the dearth of information available to the internet user.
Jo Eun Huh’s paintings, mixed media works on canvas, are influenced by an experience she had in early adulthood with a shaman. The works that she will display respond to the memory of this event, how she found a place of isolation and serenity, a link between the world we inhabit and a world that can only be temporarily felt. The terms used to describe such an encounter rub against experiences of patients using sensory deprivation tanks or ayahuasca – the limits of personhood, the limits of imagination.
Omri Harmelin’s Sign/Sympton, a piece involving video and sculptures, plays a game with language in nature. He compares symptoms, those which are felt only by the afflicted, and signs, those which can be noticed by others, with cairns and the plaques outside of establishments that typically list the names of donors. Plaques, he argues, fade into the built environment, while cairns stand out of nature, their builders anonymous. Only those who contributed to these elements know of their existence. This work creates a thread that connects each work with the same slippery feeling: the knowing of not just another person, but another consciousness, and the nagging sensation of chasing one’s own tail to understand what it all means.
These four artists are exemplary of the show’s ephemeral concept: through the concrete and the visionary, through the slippery, through photography, and through sculpture. What becomes of people after they die? This exhibition reflects upon the intangible, liminal state of death, somewhere between the afterlife and the science of decomposition. All are united in the attempt to understand a life after our own, as all are united in potentially failing in the face of the big unknown.